Are there no
Allies?

The Nebraska Family Alliance is one of many state-level organizations that lobby for homophobia and misogyny across the United States. These organizations give an appearance of being small-time, heterogeneous citizens' groups. In fact, many of them have been acquired by a nationwide organization called the Family Policy Alliance.

This central organization synchronizes the policy goals of its state chapters: traditional gender roles enforced by government, no legal access to reproductive options for women, and no government recognition of same-sex relationships, divorce, unmarried couples, or any other type of relationship viewed as illegitimate by Evangelical Christians.

The Family Policy Alliance was assembled in secret by Evangelical preacher James Dobson. Beginning in the 1980s Dobson's organization acquired various local and regional organizations, including leftover 19th Century temperance organizations and 1970s anti-porn pressure groups. He kept local names and faces in the groups, but unified their message to be centered on opposition to LGBT and women's rights. 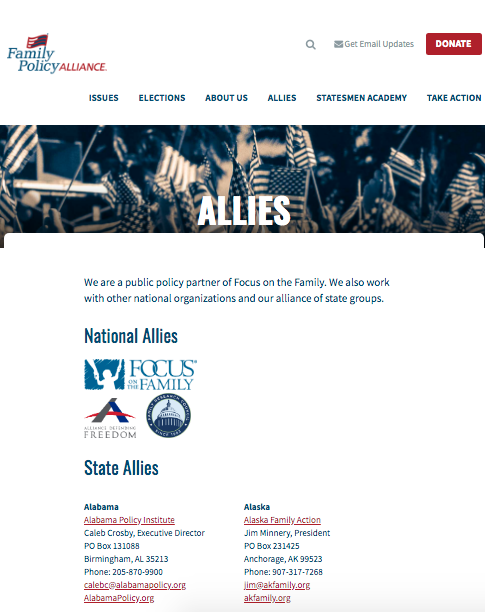 Eventually Dobson's organization relaxed its attempt to maintain secrecy. For a while, Family Policy Alliance listed all of its state chapters, which it calls "Allies," on its website. It started to give the Allies straightforward names like Family Policy Alliance of Kansas rather than diverse, localized names. And it solicited donations through a centralized "charity" called Family Policy Foundation.

More recently, the Family Policy Alliance has walked back this strategy of openness. It has removed the Allies list from its public website. No information is given about why administrators chose to do this, but it might be that maintaining an accurate list became too difficult.

For example, recently the Missouri Family Policy Council lost their domain name to anti-homophobia activists. For some time after, the Family Policy Alliance Allies list contained a link to the repurposed Missouri website. By removing the list they may hope to avoid this type of embarrassment.

They will not be able to achieve this because homophobia will continue to be embarrassing. The children and grandchildren of the people who run the Nebraska Family Alliance and the Family Policy Alliance will continue to distance themselves from their embarrassing family. Younger generations of Americans are not motivated by the same mix of nostalgia and authoritarianism that their parents were. 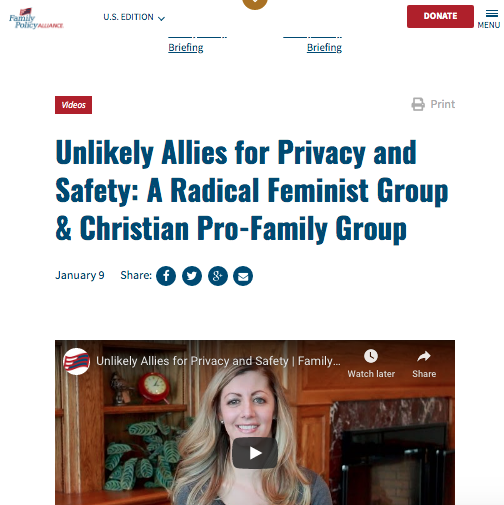 The list of Family Policy Alliance / Family Policy Foundation Allies is now archived here. Whatever the reason the organization took down the list is almost certainly a great reason that others should keep it available.

The choice to throw in with this dated stripe of feminism is another reminder of the now-embarrassing ideas that "pro-family" groups still use to control our lives. Such groups increasingly recognized as made up of bad citizens with indecent morals. It is cruel to raise a potentially gay child (which is every child) in a homophobic environment. It is cruel to raise a girl in a misogynistic household. Pro-family people who do these things are having a harder time disguising how little they truly care for their own families.

Call to Action: publicize the NFA Board of Directors list by any means you have. Encourage accountability for the damage they have caused.