There is a new Cyndi Lamm

Russ Barger believes that women ("females") are "crucibles of grace" meant to be protected and impregnated by men. He thinks birth control is outright evil. He protests outside abortion clinics to slut-shame women. He is just as homophibic as the Nebraska Family Alliance. And he's running for office. More information »

The Nebraska Family Alliance tried to turn the LGBT community against itself by defeating the Lincoln's Fairness Ordinance, leaving activists with different opinions and divided strategies. But our community is united! View images of resistance » 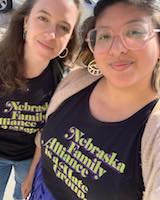 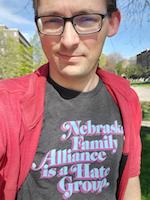 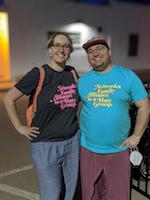 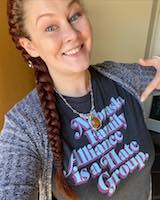 The point is to destroy families

The Nebraska Family Alliance (NFA) has taken the first step to re-legalizing discrimination against LGBT people in Lincoln. They plan to overturn Ordinance 22-31, also known as the Fairness Ordinance, by putting it on the ballot during a low-turnout election. If the NFA is successful, a Lincoln restaurant could legally hang a "no gays" sign in the window. More via Seeing Red Nebraska »

The meaning of Life

At one time the Nebraska Family Alliance and similar voices on the Christian right spent a lot of time solemnly explaining why their seemingly homophobic and misogynistic policies were actually good ideas. But lately they seem to be giving up on the strategy of making a case for their ideas. Read more »

Are there no Allies?

Nebraska Family Alliance is one of many state-level organizations that lobby for homophobia and misogyny across the United States. These organizations give an appearance of being small-time, heterogeneous citizens' groups. In fact, many of them have been acquired by the Family Policy Alliance, a nationwide organization. Read more »

Legally prevented from having a spouse or children, many aging LGBT Nebraskans are left without caregivers in their old age. Many turn to professional caregivers. When they do, they are often turning to one of the very people who destroyed their family in the first place: Lori Hogan, co-founder of Home Instead Senior Care. More via Seeing Red Nebraska »

Westboro Baptist Church recently came to Lincoln to protest at a coffee shop where an employee voiced opposition to the Nebraska Family Alliance. Westboro stands, broadly, for the same homophobic goals that NFA does. But it's still true that the organizations are quite different. Read more »

They can dish it out

A couple of blocks from Nebraska Family Alliance headquarters in Lincoln is a cafe where most of the employees are queer. It is called Cultiva. NFA employees go to Cultiva all the time. On September 11th, NFA communications specialist Marilyn Synek got yelled at by a Cultiva employee and told to never come back. Read more »

That ye be not Judged

One of very few people invited to attend the confirmation hearings of Supreme Court nominee Brett Kavanaugh was Nebraska Family Alliance Executive Director Karen Bowling. She was impressed that Kavanaugh would keep a pretty sober face, she told her audience. Not once did he get flustered, not once did he lash back with anger. Read more »

The Meaning of Family

The Family as understood by Nebraska Family Alliance designates a very specific thing: a married man and woman, with children, living out conventional gender roles. The Family is the building block of a certain social order. Above all, it is built on a certain kind of sexuality. NFA is dedicated to enforcing The Family through the law. Read more »